While COVID continues to temper how we enjoy activities associated with the Club, we do have a variety of activities for everyone to enjoy. For all Club activities, until further notice, we suggest following the CDC, state, and county guidelines: stay six feet apart, no sharing of food, wear a mask, respect each other’s space on the docks, in the Clubhouse, and in the parking lot. As Multnomah County changes risk categories, current specific restrictions will be posted in the Clubhouse.

For cruising, in addition to the COVID guidelines outlined above, on cruises there will be no sharing of
food, and please keep dogs on a leash.

RCYC members have built a well-regarded racing program over the decades, with an emphasis on longer distance racing. Currently, the racing program features three flagship events, the RCYC Frostbite regatta held in March, the RCYC Medium Distance race held in May, and the two-day Long Distance Race held in September. In addition, the club sponsors several beer can races for the racing community, as well as casual intra-club races for our members. Whether you are a hard-core racer, or simply prefer fun competition among friends, RCYC racing provides something for everyone, at all levels of interest and skill. Entry to all club races is free to members.

RCYC has an active group of racers among its members. During the racing season, we often informally meet to bench race, talk over recent and upcoming races, and help each other go faster. We look forward to helping other sailors start racing by either putting an experienced racer on their boat or having a new racer crew on a boat that is already racing. Racing is a great way to get to know Club members and increase your sailing knowledge and efficiency. Winning is great, but getting boats out on a regular basis, competing with other sailors and having fun is the most important part of our racing program.

RCYC kicks off the racing season with this traditional one-day regatta held in March. Races are held on the river in front of the club, and generally consist of 4-5 short races around marks set by the club race committee, followed by a BBQ social event at the clubhouse. This regatta is often challenging due to the early spring conditions, which means strong current and unsettled winds, and the presence of many fishing boats.

This challenging race starts right at the RCYC breakwater, and heads upriver against the still-strong May current, past several islands, under the I-205 bridge, to round a special mark near Lady Island at the entrance to the Columbia River Gorge, then back to the finish line at the breakwater, for a total distance of approximately 15 miles. Often the winner is the boat that most ably uses current relief found behind several wing dams and islands. In many years, the conditions make it difficult for some or all competitors to finish before time expires, but win, lose, or finish, everyone seems to have a grand time, and to enjoy the post-race BBQ at the club house.

This two-day race in early September is considered the ne plus ultra of long distance racing on the river. Starting just past the confluence of the Willamette River with the Columbia, the racers beat downriver against the prevailing northwesterlies approximately 15 miles to round the northern tip of Sand Island, near the City of St. Helens, to finish with a brief but usually thrilling spinnaker run at the Sand Island docks. Hundreds of sailors convene on the docks for a post-race party, and most spend the night either camping on the island or snug in their berths. The next morning the racers arise (some the worse for the night’s festivities, alas), and the next leg starts, racing downriver to round the northern tip of Sand Island, and the beginning of what is often a 15-mile spinnaker duel back upriver. A classic event, the Long Distance is a fitting culmination to the summer racing season.

A number of clubs organize races on the river. Their efforts are coordinated by an umbrella organization, the Oregon Corinthian Sailing Association (OCSA), which hosts the main website, sailpdx.org. OCSA also publishes the racebook and local racing rules, provides a protest resolution process, offers training events and lectures, and hosts the big year-end awards party, the Tropical Party, in November. All boats that race in the scored events listed in the OCSA Racebook must be members of OCSA. Membership is very cheap (currently $20). Individual clubs also charge fees, either to enter individual races or regattas, or for membership (which usually entails free entry into races).

RCYC is one of at least five clubs that run local races, each of which specializes in particular types of races or events.

Until further notice, all Board and General Meetings are being held via Zoom. Social activities noted on the calendar are placeholders, so people can tentatively make plans. However, County and State guidelines will dictate when we can safely hold such gatherings. Emails will provide further information as the year progresses.

Starting in 2022, a minimum of 16 hours will be required of each Active Membership, 8 hours before June 10th and an additional 8 hours before December 10th, annually.

Active Memberships are those who are boat owners and who are eligible for moorage, whether their boat is in the moorage or not.

Lunch will be provided.

There may be some opportunities outside of work parties, like special projects or emergencies but do not depend on those.

We plan on 4 spring work parties – March through May and 4 fall parties, September – November.

Learn about the maintenance tasks performed by members:Annual Schedule of Tests, Inspections, and Maintenance (PDF)

Each year RCYC dredges the moorage. In the last year, however no dredging occurred in response to the COVID virus. Therefore, as many members have noticed, the moorage has silted in. The dredging effort generally commences the first week of November and continues until completion, which takes about 6 weeks depending the progress made. The moorage is surveyed and the depths to be dredged are determined. A final survey is undertaken the second week of October.

Click here to read more about dredging at RCYC 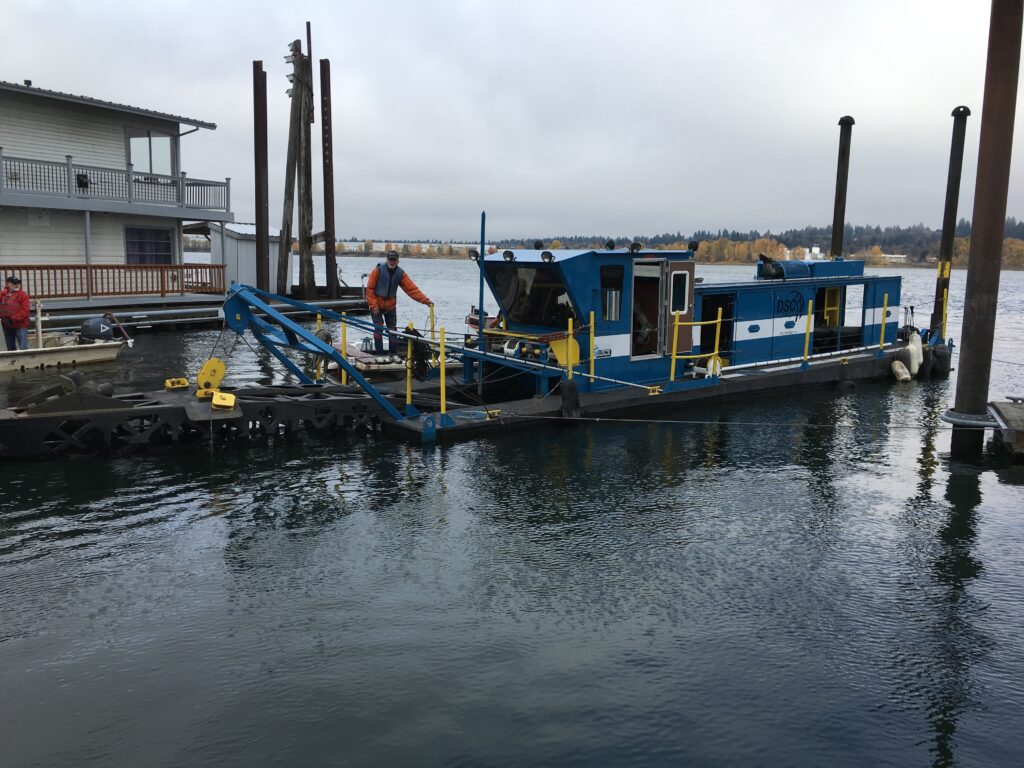