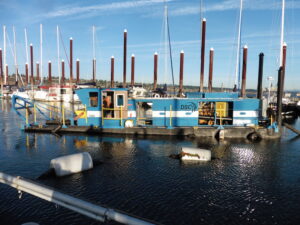 Each year RCYC dredges the moorage. In the last year, however no dredging occurred in response to the COVID virus. Therefore, as many members have noticed, the moorage has silted in. The dredging effort generally  commences the first week of November and continues until completion, which takes about 6 weeks depending the progress made. The moorage is surveyed and the depths to be dredged are determined. A final survey is undertaken the second week of October.

Members will notice the dredge in the fairways, discharge line on the headwalks and some distance on the finger piers. The material removed is loosened by the cutter head, sucked up by the dredge and discharged into the settling pond at the east end of the parking lot. The excess water flows back into the Columbia River over a weir at the east end of the settling pond. This decanting process reduces the flow of solids back into the river and keeps the operation within the turbidity limits of our permits. The work is carried out pursuant to multiple permits issued by the US Army Corps of Engineers, Oregon Department of State Lands and the City of Portland’s Bureau of Development Services. There is a myriad of requirements that must be adhered to. The key elements include a depth of removal that cannot go below -7’ Columbia River Datum and turbidity limits that cannot be exceeded. 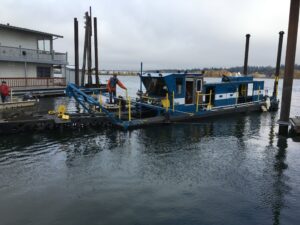 This effort includes about 45 Club Members. There are subcommittees to organize and perform the needed efforts including setting and moving the cables that allow the dredge to do its work, an operators group, a fueling and maintenance effort, turbidity monitoring and a soundings group. An initial work party sets up the discharge piping to get things started. Much of the heavy work activities have been redesigned so that all of our members (including our women members) can participate. For example, the long sections of pipe on the bank have been cut up so that they weigh no more than 30 lbs. An email will go out asking for volunteers to serve on the various committees.

RCYC’s dredge is an 8 inch Badger suction dredge manufactured in Michigan by DSC (Dredge Supply Company) located in Louisiana. The dredge has a 250 horsepower ACERT C7 Caterpillar diesel engine for primary power. This is connected to a hydraulic pump which rotates a 30 inch cutter head through a hydraulic motor. The main dredge pump a Matseo Minerals Pump rated at 160 TDH at 2,500 gallons per minute. It will pass a particle size of 4 inches. Hydraulic winches are used for raising the ladder and swinging the dredge. Winch capacity is 200 feet of 3/8” cable. The electrical system uses a 24 volt 95 amp alternator. Machinery guards are installed over all shafts. The fine paint job is a coal tar proxy. The engine and pump compartments are equipped with sliding doors for security. The roof is removable for major service for pump or diesel engines. The engine compartment is equipped with floodlights. There are also external floodlights for lighting up the work area.

In addition, some of the options to meet RCYC’s specific needs include:

The operating efficiencies of this dredge are substantial over the previous. In addition to a cleaner design it also allows for easier access to major components for repairs and adjustments.  It is small enough that it can be loaded on a flatbed truck and moved from the marina facility to a maintenance yard should that ever come necessary.  It comes equipped with lifting eyes to allow for simpler launch and retrieval.  The cost to the Club is approximately  $325,000.